The Aperture Debacle | How Apple Lost A Photographer's Confidence

May 11, 2014  •  6 Comments
My History With Apple
My relationship with (what was then) Apple Computers began in 2003. During that year, I purchased my first iPod, and was excited and amazed at the prospect of taking my growing digital music library almost anywhere with me. Of course, it was not a true necessity. In retrospect, my iPod purchase was largely driven by the coolness factor of owning one.
One year later, I gleefully took possession of my first computer from the Cupertino company. It was a PowerBook, the model of Apple’s laptop that would later adopt the Intel architecture and become known as the MacBook Pro. I used the PowerBook largely for presentations and other on-the-go types of activities. But I continued to use a Windows machine as my primary desktop computer. In fact, when it was time in 2006 to purchase a high end desktop computer for photo editing, I chose a $3,000 Dell XPS system (including a 24” flat panel monitor).
But later that year, as Apple began its transition to Intel processors, and as I upgraded my PowerBook to one of the sleek new MacBook Pros, I found myself using the laptop with greater frequency than my rather expensive desktop. Concomitant with my purchase of the new laptop was the beginning of my transition from being a photography enthusiast to doing some professional work. I began enjoying image organization and editing on the Mac so much, I started wishing the interfaces on both of my machines were consistent.
Then I took leap. I shifted my Dell XPS system to my son for gaming. Sufficed to say, he was quite elated about my decision. I bought a Mac Pro (tower), and later a more consumer based iMac. So, by 2007, I had made a complete transition to using Apple computers. There were hiccups here and there. And there were frustrations on occasions when I needed to share workflow with some of my Windows colleagues. But all in all, I felt it was a great decision. The machines were powerful and reliable. And, services like .Mac (a more rudimentary predecessor of iCloud) were very useful for sharing files across multiple machines. Synchronizing calendars, something I missed from my Windows/Microsoft Exchange days, was made easy with .Mac. Further, there was little to no malware to be concerned about. I had simply fallen in love with Apple computers. And I made a point of sharing that with family, friends, and colleagues, urging them to take the leap and buy Apple computers. I became a de facto Apple/Mac evangelist.
My Introduction to Aperture 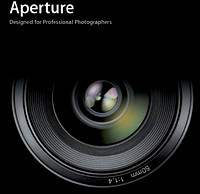 In 2007, as my photography expanded, I began hearing chatter in the professional photography community about Aperture. It was Apple’s digital asset manager that provided a tool for curating, culling, and outputting digital images - especially those shot in raw format. I visited my nearest Apple Store on several occasions just to play with Aperture. It was an amazing, albeit expensive, application. iPhoto came free with my computers. But iPhoto simply did not have the organizational capabilities of Aperture. Admittedly, I was still shooting in jpeg format at the time, but had begun talking with other photographers about the benefits and drawbacks of shooting in raw format.
Finally, on my fourth visit to the Apple Store in early 2008, I was elated to learn that Aperture 2 had been released in February with a $200 price tag, as opposed to the $500 price tag of the previous version. It was an easy decision. I bought it; I hurried home; I installed it. It was no easy task getting my images from iPhoto into Aperture, but I thought I could simply add new images going forward.
Aperture was indeed amazing. The interface was fluid. And everything simply worked - just as Apple had indicated. That was true until Apple released an update that caused my Aperture library to grind to a halt. As I complained, and other photographers complained, Apple moved quickly to provide a fix. They didn’t pretend there wasn’t a problem. Yes, they were a bit secretive, but at least they acknowledged the issues and set about to fix them.
Then came the release of Aperture 3.0 in 2010. With a sizable image library by that time, I quickly ordered the upgrade. Again, there were some significant challenges. Photographer Tony Wu summarized it well and wrote, “Basically, it seems that when some users try to upgrade their existing Aperture Library to be compatible with Aperture 3, the software ties up excessive RAM and ends up going around and around in endless loops unable to execute the upgrade. Your computer "hangs" and Aperture "chews" through your RAM” (http://www.tonywublog.com/journal/problems-i-encountered-with-aperture-3). In my case, the upgrade kept my computer spinning nonstop for about 27 hours. It was incredibly frustrating, but in due course, Apple fixed this as well. Interestingly, even as I encountered such glitches, I held steadfastly to the notion that Apple could do no wrong. Such hiccups notwithstanding, I believed that Aperture, and everything else Cupertino released, must be the very best the world had to offer.
My Current Experience with Aperture
As I write, it is now May 2014. Apple has made several incremental updates to Aperture, but the program has not had a major overhaul in over four years. The current version, 3.5.1, was released in November 2013, after Apple updated its Mac OS to version 10.9, known commonly as Mavericks. However, Aperture 3.5.1 apparently retained much of the legacy code, the same four-year old interface, and its much warranted reputation as a resource hog. It offered no new features reflecting developments in the industry, and apparently didn't add much to accommodate the industry shift towards larger and more pixel-dense images coming from most of today's digital SLRs.
On my current generation iMac, with all specifications at maximum, as well as my current generation Retina MacBook Pro, also with all specifications at maximum, Aperture 3.5.1 frequently triggers kernel panics that result in full system freezes and crashes. Bear in mind, the Aperture library of images that I began building in 2008 with Aperture 2.0, now has roughly 80,000 images. And after each crash it took a veritable eternity to rebuild and stabilize the library.
I tried several fixes following recommendations from colleagues and friends, many whom had themselves grown frustrated with Aperture's emergent bugginess and a had developed a sense that Aperture was caught in some kind of time warp where enthusiasts pretended it was perfect software and did everything a photographer could possibly need. I even created a brand new library to make sure there were no legacy projects that were contributing to the problems. It didn't make a difference. 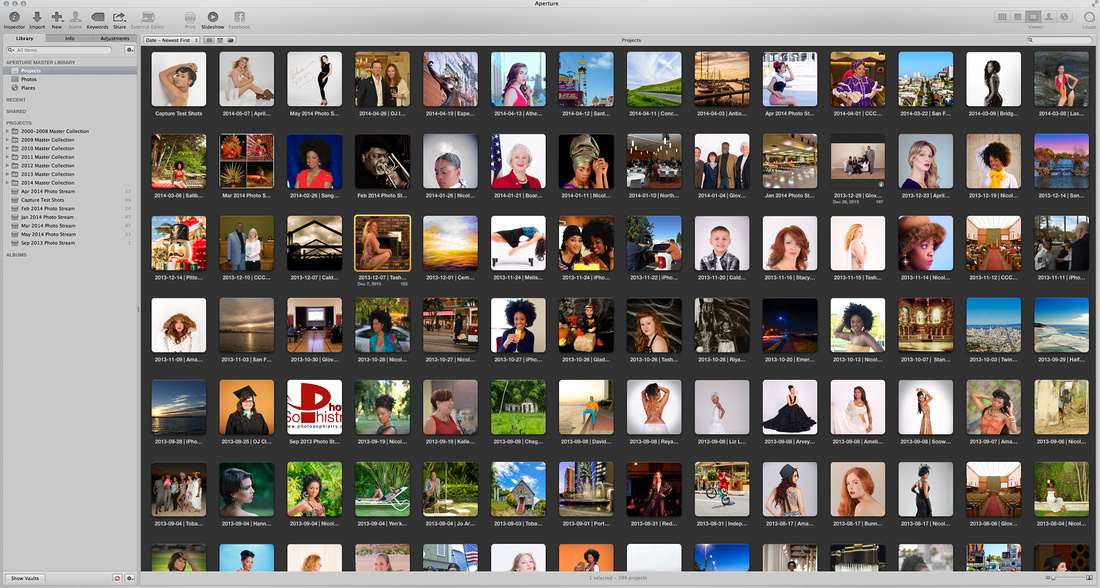 Finally, as we Mac users are wont to do when in our (admitted) arrogance we are not satisfied with something Apple has done, I dispatched an email to Tim Cook, the CEO of Apple. Apparently that email was forwarded to their corporate relations. And someone actually called and served as a liaison between the Aperture engineers and me. I found it curious, and at times quite infuriating, that they seemed more concerned about reminding me, "We cannot make any representation about the future of Aperture" and "We are making no promises about the outcome." The long and short of it, is that several months into this debacle, they have been unable to fix the crashes.
My Move to Adobe Lightroom
Alas, there were unintended (and unanticipated) consequences to Aperture’s instability. I needed reliability. I needed to be able to load my digital asset manager without opening the system monitor so I can attempt to circumvent crashes as the system resources decreased drastically with every single brush stroke. So, I began to explore alternative digital asset managers. I narrowed it to Capture One Pro and Lightroom. The latter, for many reasons, became the most suitable choice. And while I maintain many of the legacy projects in Aperture, I open it only for occasional access to those images. Adding new images isn’t practical. All new projects are now added to Lightroom.
But there was another unanticipated consequence. I realized that as a passionate Mac user - and a self-appointed evangelist for Apple products - I had ignored the alternatives that existed outside Apple’s walled garden. While I miss the stellar organization and relatively fluid (albeit dated) interface of Aperture, Lightroom (and perhaps other digital asset managers) have advanced far beyond Aperture. I won’t discuss here all the missing features in Aperture. Many Aperture users are apt to dismiss those missing elements by saying, “We can fix that with plugins.” Well, as a high resolution image shooter (raw files sizes of roughly 75 megabytes each), plugins simply create additional large files that gobble valuable store space. They are not solutions. They are patches. I want a solution. And Lightroom, though it has some interface quirks I do not like, is overall a better application. With a growing catalog of high resolution D800 images, I can count on Lightroom's stability on Apple's own operating system. I find it incredible that Lightroom doesn't crash, and provides me with a reliable and feature rich resource that works better on Apple's own OS than Aperture does.
A colleague asked recently why I had left Aperture. I responded, “I didn’t leave Aperture. Aperture forced me to leave.” Crashes, crashes, and more crashes! A hobbyist can perhaps be tolerant of Aperture’s ongoing instability. A professional photographer cannot be as tolerant. Our clients don’t want excuses. They want their images delivered on time.
This experience led me to a new way of thinking about Apple. Their computers are great. Mac OS X is amazing. Don't expect me to look for an alternative OS any time soon.  But I will never put all my proverbial eggs in Apple’s basket again. I am no longer that self appointed Apple evangelist. I have no qualms about pointing those who ask in a different direction from Apple’s products. And how did this come about? Well, four years of waiting for an update to an application that is central to workflow is not acceptable. Crashes after every few adjustments of a slider are untenable. And even if Apple were to update Aperture and fix its persistent bugginess today, I would be reticent about going back to Aperture. When it comes to image management, and in some other ways as well, Apple has forfeited my confidence, and lost an evangelist.
Blogger: David... I am a San Francisco Bay Area professional photographer specializing in portrait and fashion photography
Keywords: aperture, apple, digital asset manager, editing, lightroom, photography, photos

Carlos Bustamante(non-registered)
Same feelings. I also switch to lightroom 5.
Anand Krishnamoorthy(non-registered)
Hi there - Very nice article explaining the pain. I agree with you totally. I was a die-hard Aperture and Mac user and bought Aperture a few years back. Every update of Aperture has actually made it worse to use the software. I loved it, and sitll love it, for the simplicity, but it's woefully inadequate in updates. I find that the raw processing engine in aperture is way behind what others have done. finally, finally, I downloaded a trial version of LightRoom 5 yesterday and if I find that working properly, I will switch. I am very unhappy that Apple has forced us to look somehwere else.
Robert Lapp(non-registered)
Thanks for the very interesting but unfortunately sad article about Aperture. I have been a fan for the last couple of years and continue to believe Apple will come up with an updated version at some point. I think they should probably do it soon as more and more folks are moving away in disenchantment. Would hate to see this great product get dumped. Thanks for your terrific comments.
David Fraser Photography
Well, I've been intrigued by the number of readers of this blog post. I am discovering there are many others who share my frustrations with Aperture. A good number have moved on to other digital asset managers.